Lake Ruataniwha is located in the Mackenzie Basin in New Zealand’s South Island. An artificial lake, it was formed as part of the Waitaki hydroelectric project.
It lies on the traditional boundary of the Canterbury and Otago provinces with the town of Twizel two kilometres to the north.

The lake is approximately 4.5 km in length and covers 3.4 square km.

It was formed by the New Zealand Ministry of Works as part of the Upper Waitaki Power Project between 1977[2] and 1981 in a gorge created by the Ohau River. The gorge was blocked by the building of the Ruataniwha Dam whose crest carries State Highway 8 between Twizel and Omarama.

Lake Ruataniwha is fed by the output from the Ohau A power station and also by an overflow discharge from Lake Ohau down the normally dry bed of the Ohau River.

Ruataniwha discharges through a natural gap in the dam into a canal which feeds the Ohau B power station. Immediately downstream is a connection to Wairepo Arm, a small lake. Connected to the Wairepo Arm by way of a culvert under State Highway 8 is Kellands Pond, whose 22 hectare area occupies further gravel pits. There is a spillway (Gate 22) built into the dam which contains 3 gates with a total discharge capacity of 4,900 cubic metres per second which flows into the normally dry bed of the Ohau River.

The lake functions as a surge reservoir for the power scheme. If, during excessive inflows into Lake Ohau which Ohau A is unable to pass or, when there has been a failure of the Ohau canal, Lake Ohau can overflow a weir into the normally dry bed of the upper reaches of the Ohau River and thus into Lake Ruataniwha. Also, if water cannot pass down the canal to Ohau B then the excess inflows into the lake can be diverted by the spillway down the bed of the lower reaches of the Ohau River to Lake Benmore. While limited the storage capacity of the lake also ensures that the flows through Ohau A do not have to be exactly matched to those through Ohau B and Ohau C. 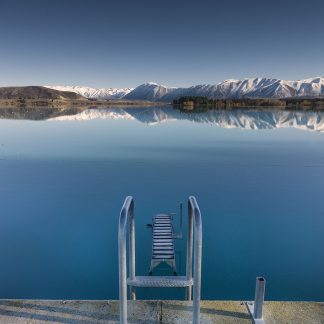