Mt Herbert/Te Ahu Pātiki can be accessed from the wharf or Whero Ave, Diamond Harbour or Orton Bradley Park (3 hr). It can also be accessed from the Packhorse Hut (2hr 15min) or Port Levy Saddle (2hr) via the Te Ara Pātaka track (formerly the Port Levy to Hilltop Summit Walkway). From Diamond Harbour, this is a strenuous walk from the sea to the summit of Mt Herbert/Te Ahu Pātiki, the high point of Banks Peninsula (919 m). The walkway mostly follows a farm vehicle track up an exposed volcanic spur. There is a shelter and toilet on the saddle between Mt Herbert and Mt Bradley.

Mount Herbert rises on the southern side of the crater rim of Lyttelton Harbour to a height of 919 metres above sea level, and is the highest point on Banks Peninsula. From the summit, a bird’s eye view of Canterbury spreads beneath the traveller’s gaze, ranging beyond the miniature Lyttelton below and the wide sweep of the hedged and road-dissected plains, to the angular mass of the Southern Alps and the Marlborough mountains, the highest peaks clad in perpetual snow.

To the south-east the tumbled hills of the peninsula rise around Akaroa Harbour, Lyttelton’s twin volcanic crater. Three million years younger than the Lyttelton volcano, Akaroa erupted nine million years ago and during the next million years buried much of the eastern and south-eastern flanks of the older volcano, the lava overflowing into the crater to build the slope fron Diamond Harbour to the tops, up which the walkway climbs.

The Maori name for Mt Herbert is thought to be Te ahu-patiki, and the Chatham islanders maintain a belief that their ancestors came from the foot of the mountain. 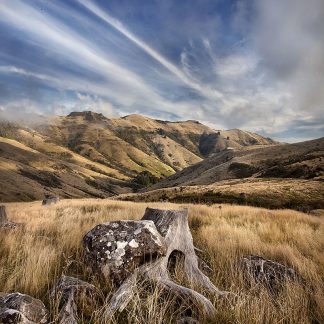 You're viewing: On The Way To Mt Herbert/Te Ahu Pātiki (with Trixie the Jack Russell) $149.00
Add to cart
0